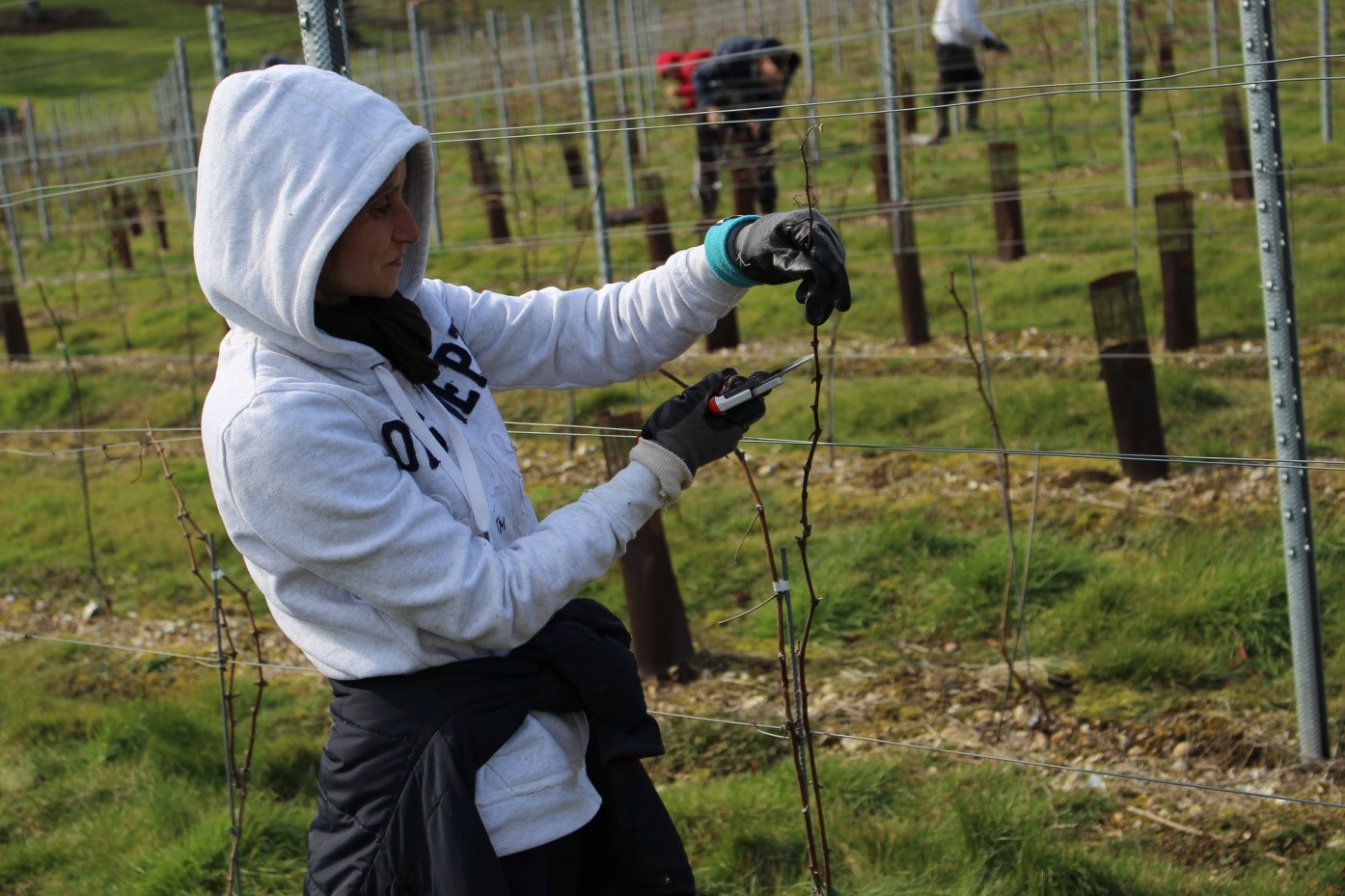 Snowdrops have been open for a month, buds are swelling in gardens and hedgerows, and there’s a hint of spring around the corner! Grapevines are late developers though, with ours very much still in their dormant phase. Visitors sometimes ask whether we are worried about the effects of winter, but vines aren’t unduly bothered by this time of year. They spend the summer months building up carbohydrate reserves to store in their (extensive) root systems, and aren’t affected by events above ground such as snow, rain, hailstorms, frost or winds. At least not during this time of year.

Our steeply sloping chalky hill acts like a giant sponge that soaks up sufficient winter rainfall to see the vines throughout the hottest summer weeks, without needing to resort to artificial irrigation.

Fairmile Vineyard is very visible from the road, and passers-by may feel it presently resembles a collection of brown twigs! In theory, most of last year’s growth (the “canes”) could be pruned off during November straight after the leaves have dropped. This however would leave the pruning wounds open to attack by disease throughout the remaining winter. Traditional Champagne vineyards in France commence their pruning on 22nd January – the Feast Day of Saint Vincent of Saragossa, patron saint of winegrowers. Fairmile Vineyard prefers to wait longer still until the end of February, when sap starting to rise through the plants, pushes any bacteria outwards.

Winter pruning is very manual – and quite skilled – work, not to mention chilly! Each of our 12,000 vines receives individual treatment according to its stage of growth. A gang of specialised fruit/orchard workers assesses every plant and judges which of last year’s canes are best worth keeping for this year’s growth. The strongest two are selected on each vine, and the remaining canes trimmed off with secateurs. Nothing is wasted in the vineyard, and the removed canes are laid in the middle of each row where they will be macerated by a mower and allowed to rot down. Other vineyards burn their prunings in specially-constructed wheeled braziers which help keep the workers warm!

It is satisfying to see a little droplet of sap appear at the end of a pruned cane, and the labourers will return at the end of March to “tie down” the cane onto the fruiting wire once suppleness has returned.